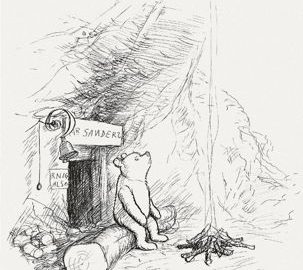 Today unannounced we had an early morning visit to our home of Winnie-the-Pooh.

Not the fictional character created by English author A. A. Milne but just as welcome this was Winnie-the-Pooh the council’s cesspit emptying man.

Every foreigner that I know calls him Winnie-the-Pooh. His real name is Paulinho the diminutive of Paulo.
After trying to navigate him through the electronic gates for five minutes. He kept standing in front of the sensors and trying to pull the gates open!. I was eventually able to show him where the manhole was.

Retiring to a safe/smell free distance while he battled to open the lid I heard his assistant saying he is going to the beach about six times (I was wearing shorts and a T-shirt) The funny thing that struck me was that I had been talking to them in Portuguese and answering their questions in Portuguese but because I was a foreigner they thought I wouldn’t understand their joke.

After a couple of cold beers, they were on their merry way.
The work will cost around 25 to 30 Euros which I am delighted with because in the UK it was 700 pounds?????

This brings me on to a new directive that we are all going to be affected by. It came from the EEC of course which is why it makes so much sense.
Virtually all homes in Portugal are going to be forced to connect to the council’s new sewer network. This network is going into every village and you can tell where the new sewer pipe has already been laid by the awful state of the road after they have been laid and backfilled.

Potholes and dips in the road everywhere.

You can obtain a special exemption but it will require some work on your part. Those of us with a septic tank in the back garden will need to fill it in and run a new sewerage pipe out into the road next to the sewer. The fact that this could be up hill doesn’t seem to have occurred to them.

Personally, I will resist and rely upon my unannounced visits of Winnie-the-Pooh a far more human and pleasant experience that anything that came out of the EEC.