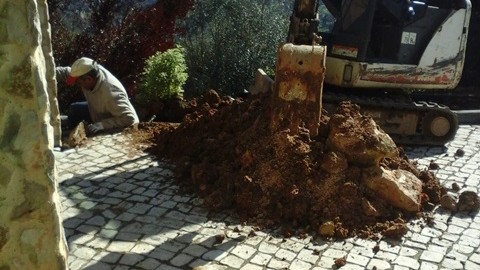 What a pain, no toilets, showers washing machine or even water for tea.

We were called out as part of our 24 hour service and it had to be a Sunday didn’t it.

The home owner had noticed that his water pressure was fluctuating from low to normal. He never thought much about it because that can happen here. Don’t know why but it does.

Sunday morning he tried to have a shower but the boiler wouldn’t work and there was hardly enough water in the kitchen tap to make a brew.

Just what you don’t need a problem like this on a Sunday.

As a last resort he spoke to his neighbors who all have plenty of water. He checked that someone had not turned his off by the water meter and noticed that it was turned on BUT the meter was whizzing around like a mad thing.

Not knowing what else to do he gave Castelo Construction a call and we concluded that he had a big water leak on his side of the water meter. We agreed to come out and take a look. 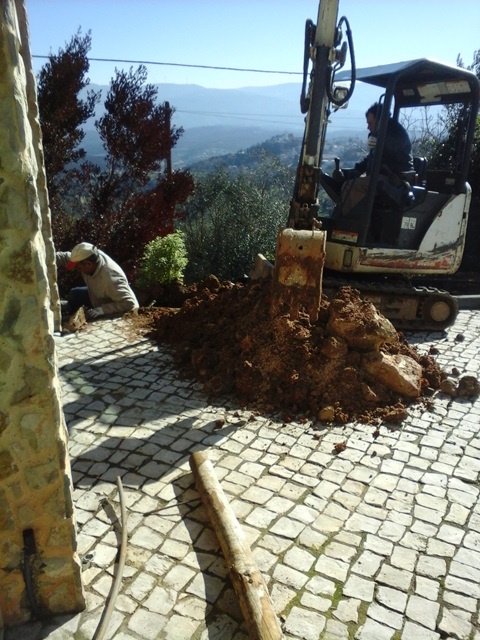 Normally there is some logic as to the position of the water pipe from the meter into the house and there is a “Caixa de distribuição” distribution box inside the house.

This has the black high pressure water supply pipe going into a manifold and then distributed via PEC or copper pipe.

I this case there was no sigh of the black pipe (signature of a cowboy builder) We turned the water off in the house at what we assumed was the water entry point as nothing was marked and the house owner could not remember seeing the location of any pipes during the build.

We then had a detective task that would baffle Sherlock Holmes.

Where did the pipe go from the meter to the house?. You can use logic but I don’t think the original builders had any so it was difficult to guess.

Because we had turned off the water going into the house we knew that the problem was from the house to the meter. This required us to find the leek which was over a meter down and in a potential tube length of 30 meters.

We decided to dig a trench along the length of the drive until we found where the tube entered the house and then cut it off so that we could run a new pipe underground from this point to the water meter.

After digging for 3 meters and a meter down we found the problem. It was a broken T joint the black supply pipe had been jointed to the white PEC pipe underground. It had no conduit or protection so just pulled apart as the ground around it settled. The pipe is very strong but before it had broken it had been compressed by the weight of the earth above to being almost flat and closed.

It is a wonder the house had any water at all.

The solution was easy enough to apply 3 new joints, a meter of pipe conduit and joint tape less than 20 Euros of materials. The real cost came in the two people working for 6 hours and the cost of the digger.

Not that our client cared he had his water back on and was happy.