I was thinking about using a new subcontractor recently and was given a recommendation by a reliable friend.

I am using this example of Builders estimates Portugal to help people new to Portugal so they know what to expect and how things are very different here to what you will have been used to in your home country.

Setting the scene, I contacted the Portuguese builder and arranged to meet him so that I could take him to the house and explain to him the work that was required. He turned up on time which was a major + as I was expecting to have to wait 20 to 30 minutes.

We went to the house and I explained in Portuguese what work was required this took around 20 minutes. I explained that I wanted an estimate for this property and if the work quality was good I would give him two more properties to price. I I also said that the quotation was urgent and that I would like it within a week.

Then I waited, nothing so after a week my friend dropped by the Portuguese builders office and told him that he must arrange the price quickly as I was talking to other construction companies. Another two weeks later (three in total) I received a call from the Portuguese builder saying that he was outside my office but I wasn’t there.

I already knew that I wasn’t there I was working in the Algarve.

I asked him to leave the quote and that I would see it wen I returned to the office. Elapsed time now 4 weeks.

Here is the quote. 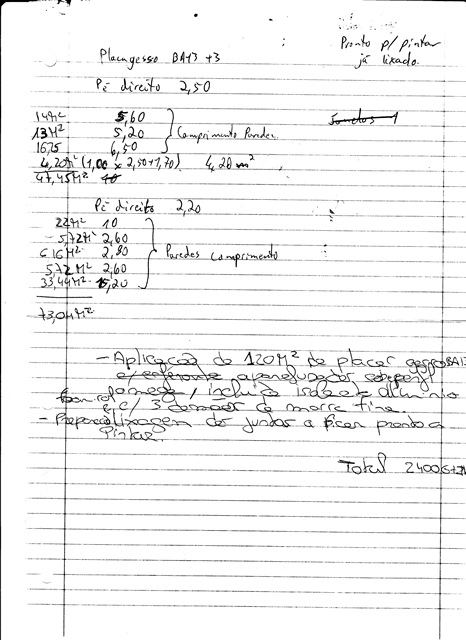 Personally I would like a quotation for work that I could show a client so that they could clearly see what the quote covered.

The result is a few hours wasted by me and no work for the builder.

Make sure that you understand everything on the quote from your builder. If not ask them to explain in writing so that you  can be confident that you are getting what you asked for.