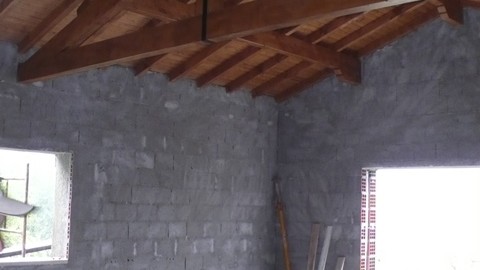 We are heading to a scary place at least it can be, in an old house in central Portugal.

This bathroom looks fairly modern with its tiled panels. You will notice that the bathroom has an old wooden ceiling which will be cold in winter and hot in summer.

The shower tray shows no sign that it has had an enclosure or curtain fitted so it may not have ever been used. The position where the normal shower mixer taps go is there in the tiles but as there are no taps it’s unlikely that water (hot cold or both) is connected.

Also the large container in the shower tray could be what was used to pour water on people who were having a shower. It would be a good idea to test the bidet to see if it is connected to the water as well and also check that the drains on the shower tray, sink and bidet take waste water away.

This point could be a life saver. Old houses can have low ceilings so make sure there are NO 240 Volt light fittings or electrical points in the bathroom. There often are and this can cause fatalities to users of the bathroom.

If you would like a second opinion on the house that you are interested in buying we can help call 00351 927168247 or take a look at some of our projects www.casteloconstruction.com